I’m super delighted to introduce to a talented and lovely writing friend, Rachael Johns. Rachael is an English teacher by trade, a mum 24/7, a chronic arachnophobic and a writer the rest of the time. She rarely sleeps and never irons.

Take it away, Rachael!

TALK OF THE TOWN has been mulling about in my head for a few years and, like all my books (and probably most author’s books) it is a collaboration of a number of tiny little ideas that refused to let me be.

Ghost towns – abandoned or neglected old towns fascinate me. As I have lived in small rural communities for the last 11 years, I have driven through a number of these towns on my way to and from other places and I always wonder about how and why what was once a thriving community died. I feel sorry for the beautiful, old, neglected buildings. I always knew I wanted to write about a town that had been abandoned by its residents and left to fall apart.

Dairy farms – I’ve written a lot about sheep farms and even beef cattle farms, but TALK OF THE TOWN is my first rural romance set in dairy country. This is surprising because I have always loved dairy cows, ever since spending a few days on a friend’s dairy farm in the Isle of Gigha (Scotland) when I was twenty-four years old. That is a long time ago now so when I decided that my latest rural hero would own a dairy farm, I had to do a little more recent research. A friend of mine grew up on a dairy farm and still lives in dairy farming country. So she asked friends of hers if she could bring me round one morning (early one morning, like before the sun rose) to get an idea of exactly what being a dairy farmer involved. I got to see them bring in the cows, put them through their rotary milking machine, ask lots of questions and even meet their newest calves (which are simply adorable). I took lots of notes and lots of photos, which I looked back on when writing the dairy scenes of the book. 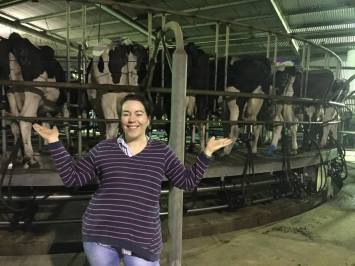 Final piece of the puzzle – I cannot tell you exactly what this is because… spoilers (you’ll have to read the book to find out what I’m talking about), but the heroine of TALK OF THE TOWN is actually loosely based on a friend of mine who once told me about her dark past and how she’d left it behind. A few years back when I was running (during my brief dalliance with jogging) past her house early one morning, a line appeared in my head: “She had enough skeletons in her closet, she could deal with a few ghosts!” I knew then and there that this line and the “she” it would refer to needed to go in a book and that it was finally time to write my ghost town where this “she” person could have escaped to.

It still actually took a few years before I wrote this book and during this time I mulled this story over in my head – adding other things that I thought would fit, including ice-cream and Maremma sheep dogs – so when I finally sat down to write the plot was pretty much in my head. But that didn’t mean it was easy to write. TALK OF THE TOWN was a challenge because both the hero and heroine are keeping secrets from each other (one on purpose, one without realising it) and this made it hard to show them getting to know each other and falling in love. But hopefully I pulled it off and hopefully if you read TALK OF THE TOWN, you enjoy my story which was inspired by ghost towns, dairy farms, friends, ice-cream and dogs! 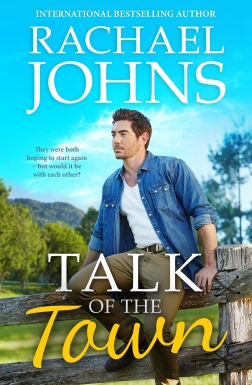 Lawson Cooper-Jones has two priorities in life – his son, Ned, and the survival of the dairy farm that has been in his family for generations. Despite the best efforts of the town matchmakers and the determined pursuit of local girl Adeline Walsh, Lawson’s heart belongs still, and only, to his late wife.

But when a flat tyre strands Lawson and Ned in nearby Rose Hill, he’s surprised to find a woman living alone in the old general store of the deserted town. Ned immediately forms a bond with the beautiful stranger called Meg, and Lawson is surprised to find himself captivated by her too.

Although shy at first, Meg starts to open up to him about the haunting secrets of her new home and, with Lawson unable to get her out of his head, they agree to investigate the history of the old building together. Soon they find their friendship has bloomed into something more.

But when meddling Adeline makes it her mission to uncover the truth about the newcomer and her real identity is revealed, Lawson and Meg’s budding romance comes crashing down. Can they both learn to forgive in order to claim a future for their damaged hearts?

AND A GIVE AWAY! Winner’s choice on any print book in Rachael’s backlist!  Leave a comment below and on 10 May Rachael will draw a random winner.

What Rachael (and I!) would like to know is  what is your favourite farm animal and why?

UPDATE: And the lucky winner is RITA WRAY! Congratulations, Rita!

23 thoughts on “Behind the Story: Rachael Johns”