Today I’m excited to introduce you to Shona Husk, who is the author of the Shadowlands, Blood and Silver, and the Face the Music series. You can find out more information about Shona at http://www.shonahusk.com or follow her on Twitter @ShonaHusk, Facebook http://www.facebook.com/shonahusk or join her newsletter: http://mad.ly/signups/119074/join

Shona, please tell us about your story behind the story …

The Blood and Silver series came out of a challenge I set myself when I was made redundant during the Global Financial Crisis. I’d been writing for a  couple of years and had finished 2 novels (which still lurk in the back of a cupboard, but around that time I’d come to the realization that if it took me over a year to write a novel it was going to take me a long time to learn the craft. So I’d turned my attention to novellas and was reading heaps of them (on my computer because I didn’t have an e-reader…I’m not even sure e-readers were around or had reached Australia back then). Novellas had plot and character and dialogue and setting, all things a novel needed but without subplots. I thought if I could learn to write a novella, I’d be able to transfer those skills to a bigger project.

So while I was jobless and looking for work I set myself the goal of plotting and writing a novella every 2 weeks. I was aiming for more words a week than I’d ever written, but then I did have more spare time because of the lack of a job.

Lady of Silver wasn’t called that back then. It was the last 15k novella that I wrote before finding a job. It was also the one which I knew could be more.

The other three novellas sold. The next novel I wrote sold (so my theory about honing story structure by writing novellas paid off, YMMV). Lady of Silver got re-written and expanded. I plotted the next book in the series because I now knew what the overarching plot thread would be—I like series linked by a plot thread (although I have written a few stories that share a universe but no common thread).

So I dabbled with contemporary romance, I started writing urban fantasy under a different name and I kept writing paranormal romance on the side because I knew it would come back eventually.

I re wrote Lady of Silver again, because I still believed in the idea and it combined a few of my favourite things.

I love lost civilizations. Stories about ruined cities found in a jungle/under water/buried in a desert will always get my attention. What happened to the people? What was it like when they lived there? Who were they?

Medieval witch hunts have also fascinated me, how can people be whipped up into such a hateful frenzy? And be so cruel to others (I’ve been to a medieval torture museum and it was sickening)? Unfortunately as I’ve gotten older I can see how easily it happens…

I also wanted to read a story where the hero was human and the heroine was the one with the magical powers and he had to come to grips with her world because usually in paranormal romance it’s the other way around.

So the premise for the Blood and Silver series was the survivors of an ancient and magical civilization struggling to live on, while being hunted by those who still see them as a threat. Oh and there’s vampires…evil vampires…because it’s about time vampires got back to feeding and killing and be bad. 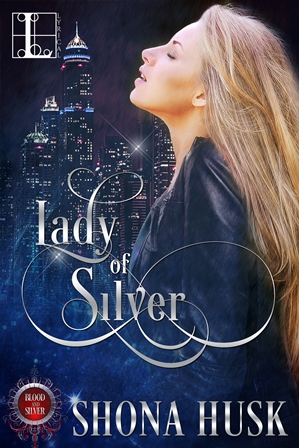 More about Blood and Silver:

A man on a mission
A brutal crime is haunting detective Dale Morgan. A young woman has been murdered on the city’s outskirts, and her blood drained. Dale suspects the leader of a depraved cult may be to blame. Yet with barely a shred of evidence at the crime scene, Dale will have to turn to the one person despises almost as much as the killers he puts behind bars.

A woman with secrets
To humans, Saba Venn is a psychic, but she’s Albah, a race long forgotten by humans but who live amongst them, her powers fueled by blood and silver. She agrees to help Detective Morgan, if it means stopping the vampire cult she believes is behind the killing. But the attraction she feels with Dale is immediate, and as their relationship intensifies she begins to doubt she can keep her secret from him.

One thought on “Behind the Story: Shona Husk”